A night out at Ribblehead

Not a normal venue for a night out, but Ribblehead does have its attractions on a pleasant midsummer evening. My objective during this visit was to take advantage of the dark sky and lack of light pollution to take some photographs of the night sky with the iconic Ribblehead Viaduct as foreground interest.

I chose a moonless night, and then waited for a clear weather forecast to give me the best chance of capturing the images I wanted. On 3 July the Met Office was forecasting clear, and the BBC partly cloudy. I looked out of my window on a crystal clear late afternoon sky, and decided to trust the Met Office and make the trip.

The disadvantage with astrophotography in the Summer is that the sun sets late, twilight is extended, and it never gets fully dark. The advantage is that it is usually much warmer than in the winter, and the Milky Way is highest in the sky at this time of year.

After a pleasant evening drive through the Yorkshire Dales I at Ribblehead arrived in plenty of time to walk over from the parking area near the Station Hotel to the viaduct to decide where I wanted to be later to take my photographs. I discovered a couple of things at this time - first, although a light wind would reduce the risk of camera shake, it meant that the midges were out in force, and second, the iphone compass appeared to be absolutely useless - suggesting that north was in any sort of random direction. Note to self - remember to pack some midge repellent next time. Looking at the compass  issue the next day, I found that a magnetic clasp on a phone cover can throw the compass out. I should have thought of that!

Sunset was at around 9:45pm on the night of my visit, and I expected to be able to begin taking photographs with a dark sky about an hour later. It actually took much longer for the sky to really darken, so I decided to experiment, and take some shots of Ingleborough and the Ribblehead Viaduct.

I normally try to include as much of the sweep of the sky as possible in my astrophotography images. The wide angle perspective can cause distortion in the foreground. However, that distortion can itself sometimes add drama to a photograph.

This was my first effort of the night: 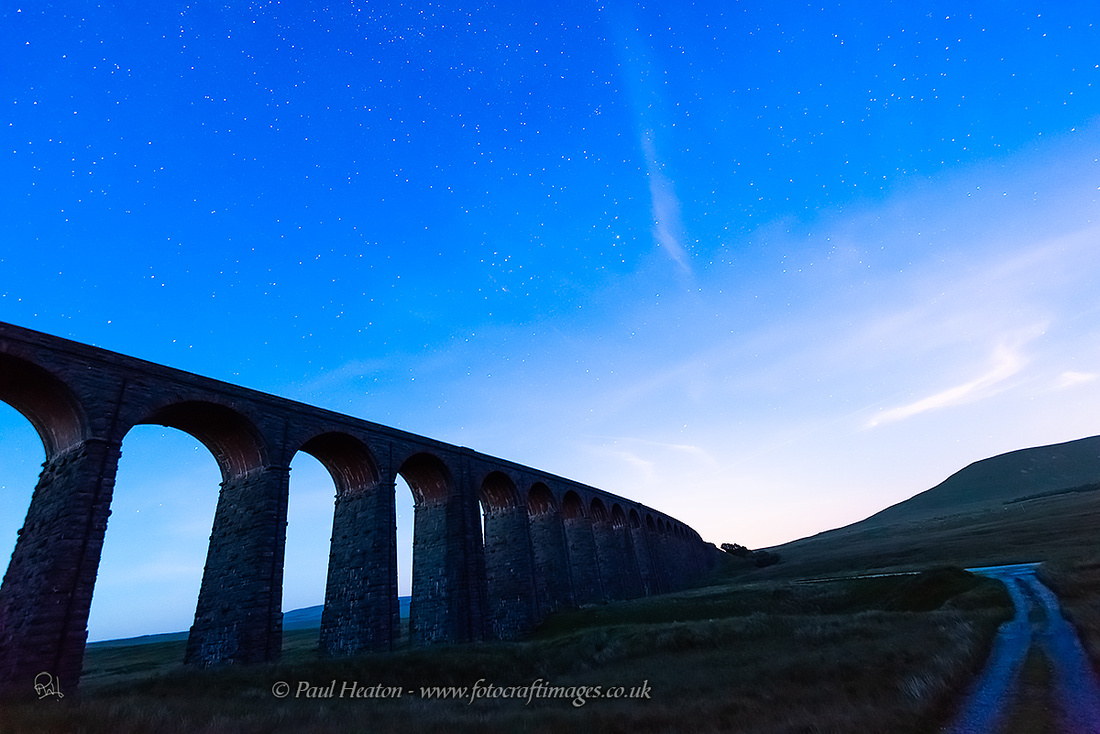 My next subject was Ingleborough: 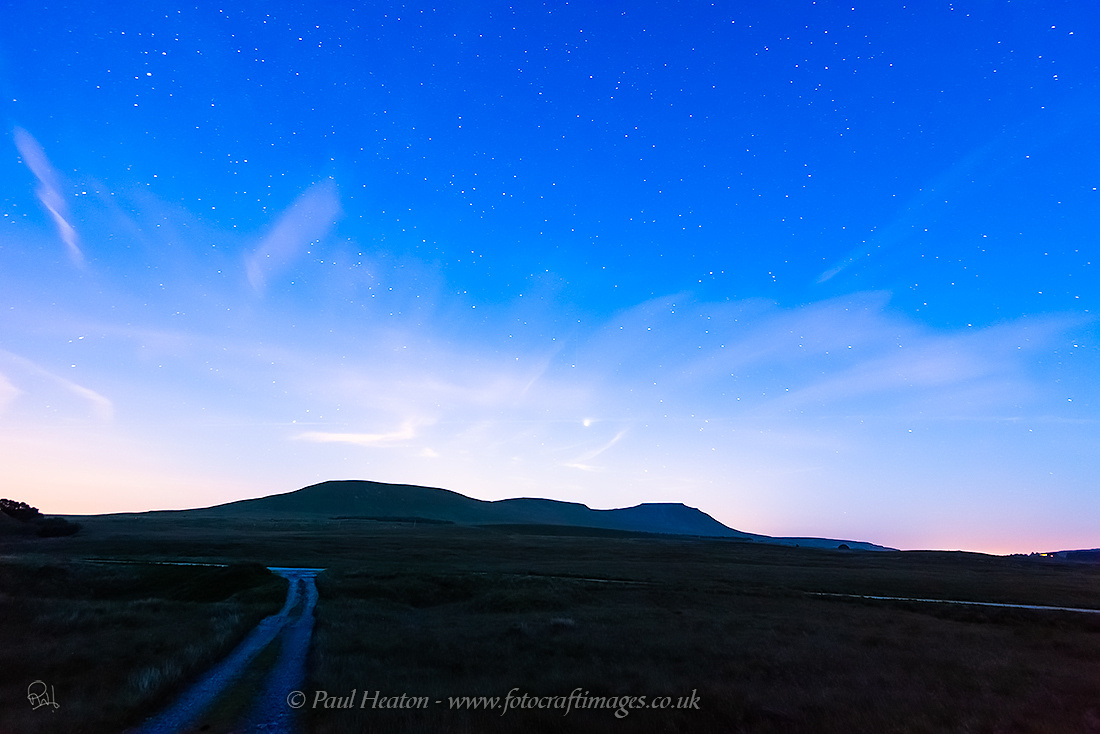 As the sky darkened further I changed my viewpoint, setting up for three shots that would later be merged in Photoshop to give an even wider perspective than my 16mm lens can provide. First was a shot looking directly onto the viaduct: 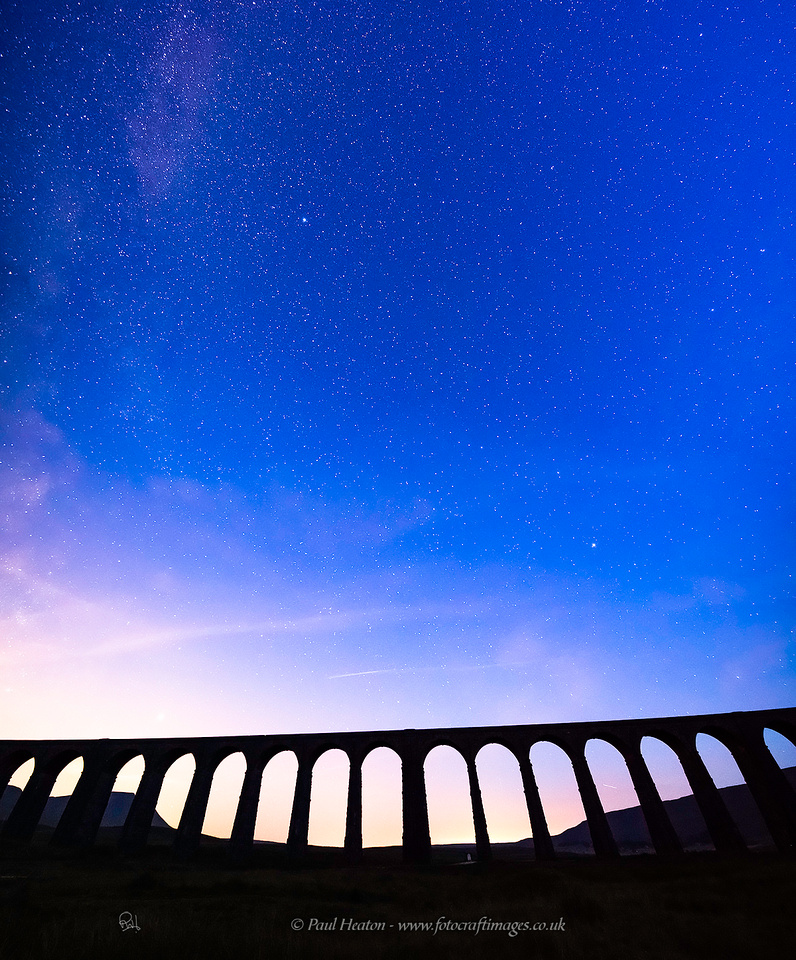 Next, a shot from an angle looking more to the South, where I hoped to include the milky way in the image: 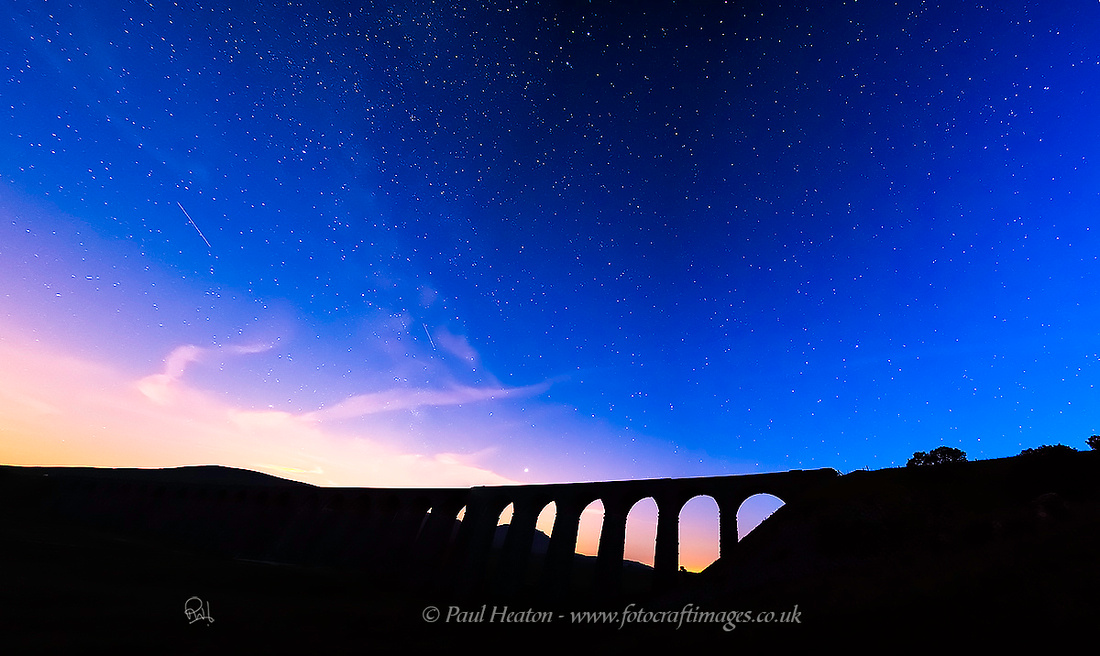 There are a number of different options in the photomerge facility in Photoshop. This same image (created from three overlapping exposures) looks quite different with a different option selected: 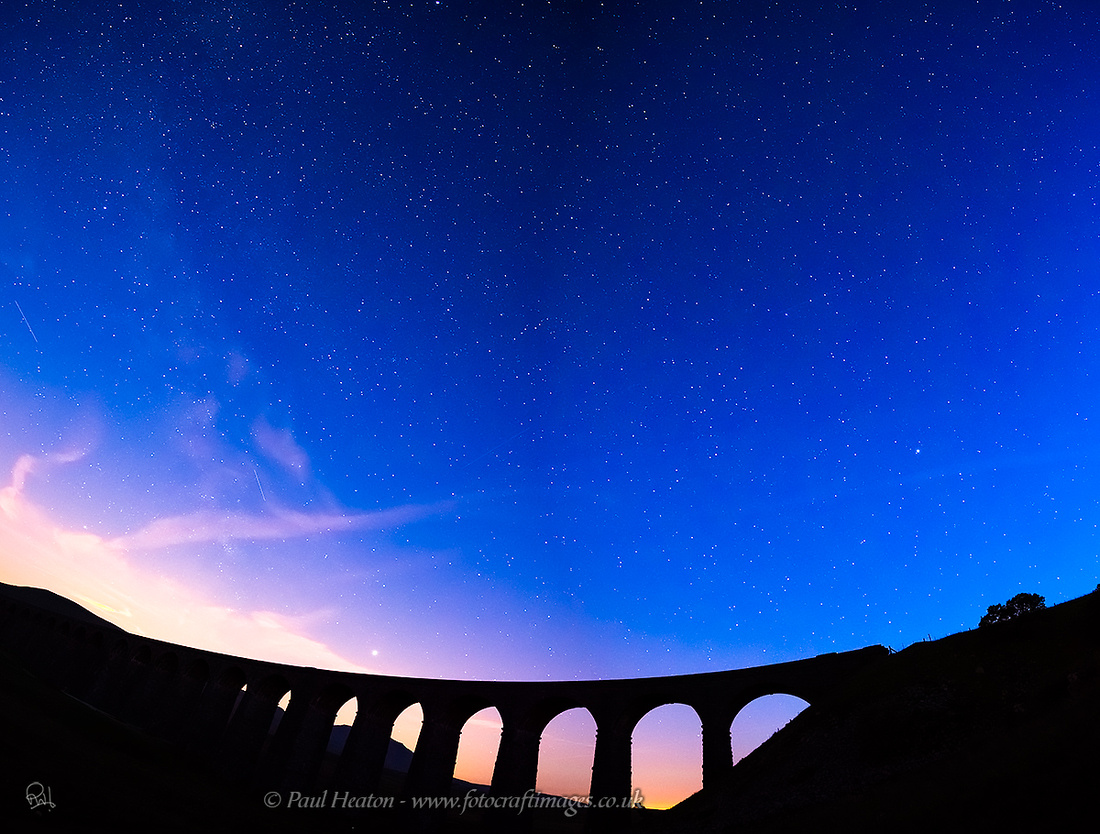 I was pleased with the way the clouds near the horizon faded into the glow of the milky way in this image. However, most of the arches of the viaduct are lost against the surrounding hills from this viewpoint. My final location was therefore a compromise - showing more of the viaduct arches, but also giving prominence to the transition between wispy high level clouds and the glow of the stars of the milky way: 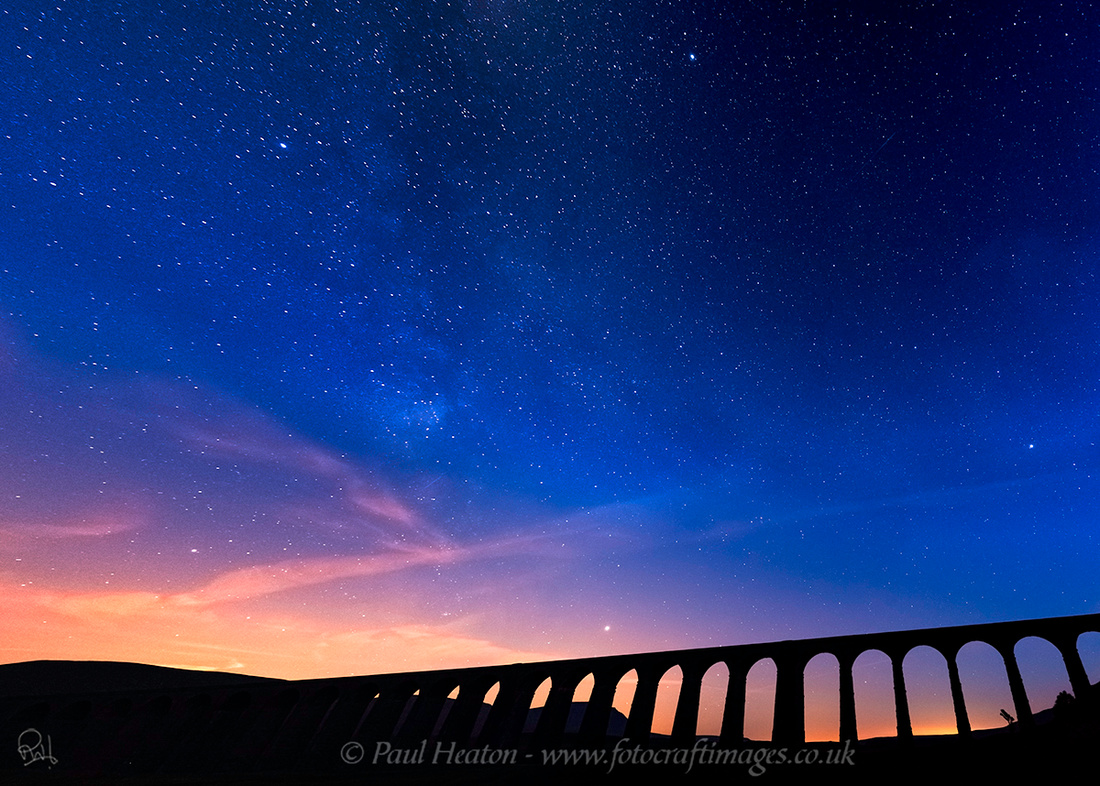 After taking these photographs, I discovered one of the other advantages of astrophotography around midsummer- it is quite easy to follow a footpath at 1:30am on a moonless, but starry night without using a headtorch!

After processing the images, I have decided that the final image above will be a worthwhile addition to my portfolio for shows and events. This is what it looks like as a 16 inch by 12 inch framed print in a charcoal frame: 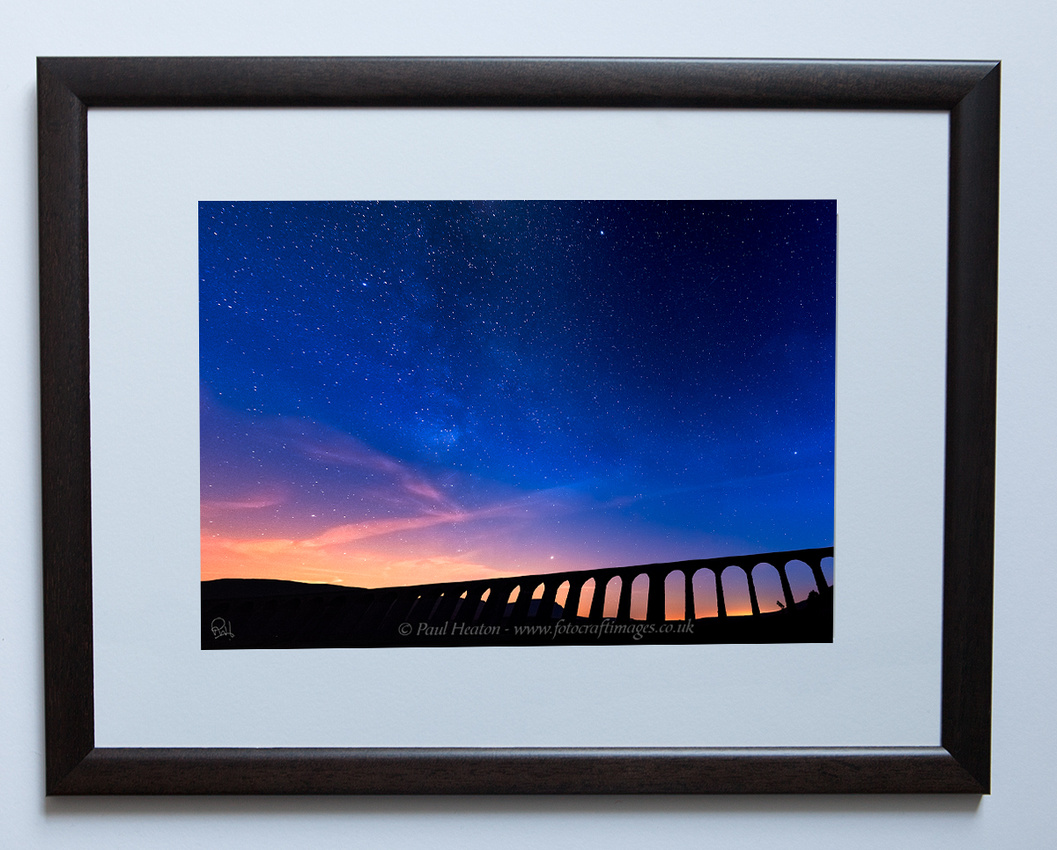 This photo can be seen in the Yorkshire Three Peaks gallery at the following address - Ribblehead at night .