The Yorkshire Three Peaks walk has become one of the UK's most popular challenge walks. It has been estimated that around 200,000 people currently attempt the walk each year. There are quite a few companies now offering guided walks around the circuit, and many people complete the walk to raise funds for charity. Many more do it without any ulterior motive, as a personal challenge or as an excuse to spend time out in the glorious countryside of the Yorkshire Dales.

The circuit of Pen-y-Ghent, Ingleborough and Whernside is around 24.5 miles long, and takes in about 1,600m (5,300 feet) of climbing. The recognised target for completing the circuit is twelve hours, although people have done it much more quickly, and more slowly. There is an annual three peaks race, and the record for the latest version of the course is a mere 2 hours 46 minutes and 3 seconds! 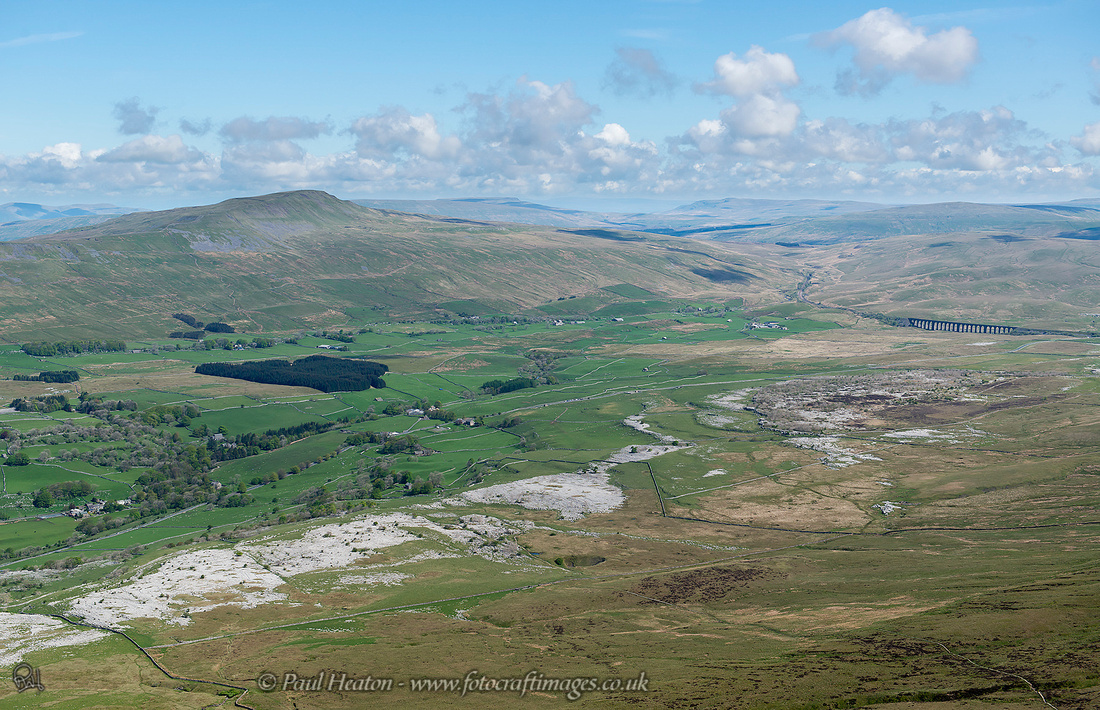 View across to Whernside from IngleboroughOn a clear day the summit of Ingleborough is a tremendous viewpoint in all directions. This image shows the view Northwards, with Whernside prominent and Ribblehead Viaduct on the right of the photograph. The view stretches past Wild Boar Fell as far as Mickle Fell, over 30 miles distant.

Whatever speed it is completed at, the Three Peaks circuit must be approached with a proper preparation and forethought. The Cave Rescue Organisation deals with a steady stream of call outs from three peaks walkers, some of which could have been prevented if the walkers had only thought to use or take appropriate equipment with them - in particular a map and compass, head torch and proper footwear high enough to protect the ankles. The Yorkshire Dales National Park has prepared a code of conduct for three peaks walkers that can be seen through this link: Code of Conduct , and an outline route description available at this link: Three Peaks route description.

People tackle the three peaks route throughout the year. The majority however complete the walk during the Summer months when the days are longer and the temperatures usually warmer. There can be hundreds of people on the summits on busy Summer weekends. This reduces the risk of navigation errors, but also reduces the peace and quiet of being out on the Yorkshire fells.

Provided the weather is good, there are extensive views from the summit of each of the three paeks, as this photograph from Whernside demonstrates:

Panoramic view from Whernside, Yorkshire DalesView South from the summit of Whernside annotated to show Ingleborough, Pen-y-Ghent and other points of interest

Each of the three peaks has its own distinctive shape, but they are similar in appearance to some degree because they share a similar underlying geology. The rocks forming the peaks are flattish sedimantary rocks of carboniferous age - 300-360 million years old. The lower slopes consist of great scar limestone, and the upper sections of the hills a succession of limestone, mudstone and some sandstone of the Yoredale group. Differential weathering of these rocks, which vary in hardness, gives the distinctive stepped profile of the peaks.

Walking conditions along the route vary considerably. Some areas have delightful springy limestone pasture, while others have peaty soils and some blanket bog. The Yorkshire Dales National Park has carried out work along the route to reduce footpath erosion. There is now a bypass around the infamous "Black Dubb"- an area of bog along the route that was, in my opinion the worst path in the Dales until the new path was constructed. In spite of the improvements, there are some areas (Such as the descent from the summit ridge of Whernside where the path has spread into a broad swathe), and other areas can be pretty muddy after rain.

The mug can be purchased from this page .

We also offer a coaster set. The four photographs on the coasters are of the three peaks -  Pen-y-Ghent, Ingleborough and Whernside and the iconic Ribblehead Viaduct which is prominent along the route of the walk. 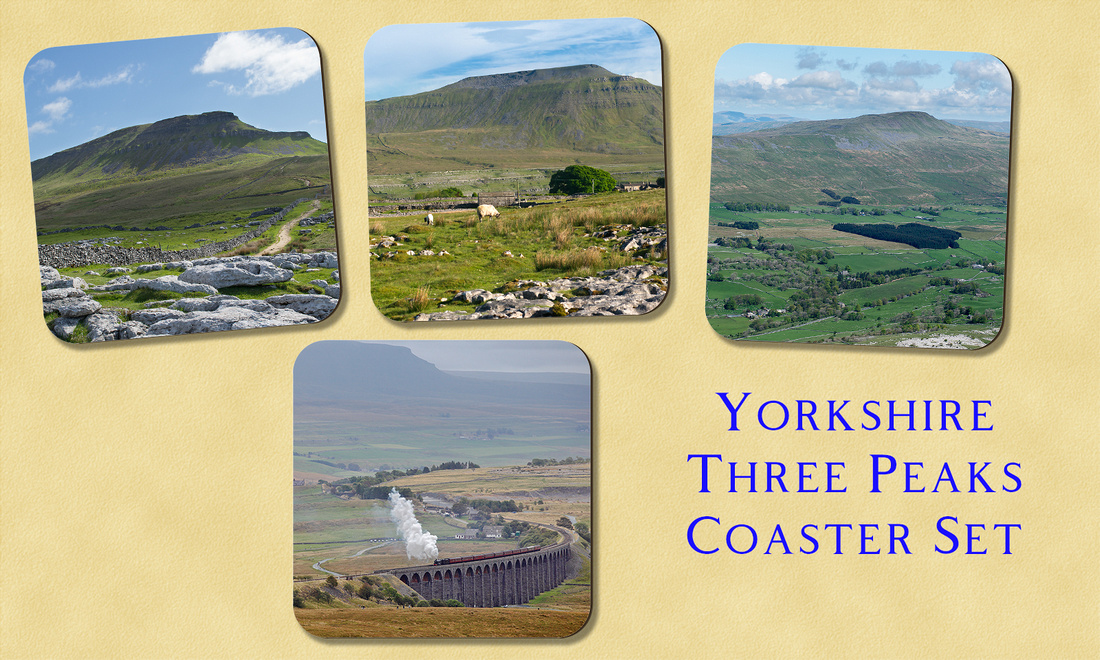 Yorkshire Three Peaks Coaster SetA set of four wooden coasters featuring photographs taken along the route of the Yorkshire Three peaks challenge.
The images show each of the three peaks - Pen-y-Ghent, Ingleborough and Whernside, with the fourth photo showing the iconic Ribblehead viaduct which is seen along the route of the walk.
The coasters are durable, wipe clean and heat resistant - perfect for both hot and cold drinks. The vibrant photographic images on the coasters make an attractive and practical gift. The coaster sets are supplied in a cardboard box.

The coaster set can be ordered here .