For the second article in my regular feature in Yorkshire Ridings Magazine I chose a dales classic - the ascent of Pen-y-Ghent from Horton in Ribblesdale.This walk can be very busy on Summer weekends when streams of "Three Peaks Challenge" walkers use parts of the route. To me it is a much more pleasant walk on a weekday, or outside the main season. You are never likely to be completely alone on such a popular route. However, when it is quieter I feel more inclined to savour the wonderful scenery. It is one of my all time favourite dales walks.

The day I took the pictures for this walk started very clear, but gradually clouded over. This is reflected in the photographs, with more cloud showing on the pictures from the summit and descent than from the initial climb. After waiting for about 45 minutes at Hull Pot, I was lucky enough that one of the few reaining patches of sunlight lit up the hole, giving some suitably dramatic light for this impressive feature. This image is on the final page of the article, and both Hull Pot and Hunt Pot (not visited on this walk) are definitely worth the short detours from the main route.

After finishing the walk I visited the Pen-y-Ghent cafe for a hot drink and some cake. I was surprised to see two sets of people come into the cafe asking for directions on how to climb Pen-y-Ghent.(The path starts just down the road from the cafe). Neither seemed very well equipped for fell walking. The cafe staff were helpful to both, and did gently point out that it could be  much colder and windier on top of the hill than at the bottom - which didn't seen to put off the visitors. On this day the clouds were well above the summit, but I could see the cafe staff would be in a more difficult position when the conditions were worse, or the weather forecast was poor. People walking in the hills have to take prime resopnsibility for their own safety, but I wouldn't like to find out later that I had directed somebody onto a route where they had later got into difficulties.

The article can be seen by clicking on the image below: 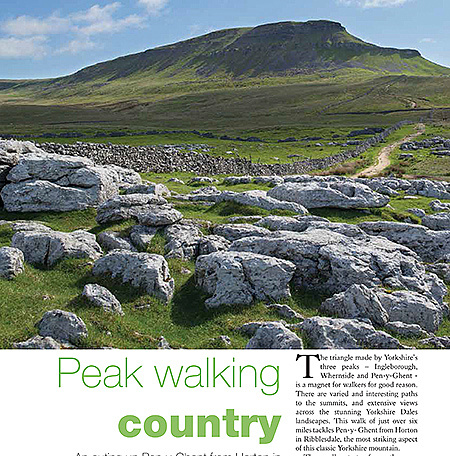