Today's modern digital SLR cameras are remarkably sophisticated. However, in some situations they do struggle to see places in a similar way to an even more remakable optical instrument - the human eye.

I do not often worry about colour balance when taking photographs. The automatic white balance will most often reproduce an image as I have seen it and, if it does not, I can make minor adjustments in post production without loss of quality. I always shoot in Raw format, which allows me to "develop" images from the original data captured by the camera sensor as I reqire to give me the best possible final image quality.

For evening and night shots I also rarely make white balance adjustments. These photographs often have mixed light sources, and correcting for one can distort another element of an image. The result is not likely to be exactly as our eye would see it, but it is a faithful reflection of the light present when I took the photograph.

There is however one situation when I would always need to make a white balance adjustment to give an acceptable image. This is when an evening or night shot is lit by one type of light, and that light gives a severe colour cast to the image. I recently decided to try to take a photo of Clifford's Tower with a clear, star filled sky behind it. I knew there would be light pollution in the centre of York, and didn't have a clue whether I would be able to capture anything interesting. However, unless you try, you will not achieve anything, so I decided on a morning when there was no moon in the sky and a clear weather forecast, set the alarm early, and kept my fingers crossed!

I was rewarded with a clear sky, which was great. However, Clifford's Tower was lit by a line of sodium street lights. The view looked OK to the naked eye, but I knew from previous experience that the street lights would give a rather ugly colour cast to the photographs. I adjusted my camera to give the best chance of recording the starlit sky, took a few images and moved on to my next target location.

When I looked at the downloaded photographs the colours were as yellow as I anticipated. This is the unprocessed image: 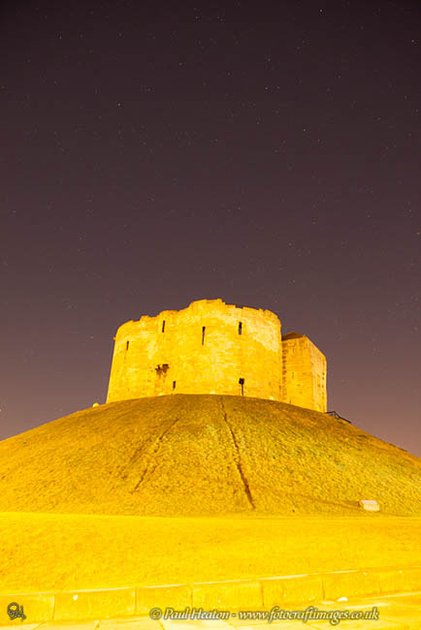 I wasn't surprised by the colour cast in this image, but I was surprised by the number of stars visible in the night sky. This is one area where the camera sees much more than the naked eye. I decided to carry out some work to reduce the colour cast in the photograph. I feel that this type of shot can never look entirely natural. It is lit by atrificial lights from several directions. Our sensibilities would however expect grass to look a shade of green rather than a rather orangey yellow. Adjusting the colour temperature and contrast, and making a minor crop of the foreground gave this result: 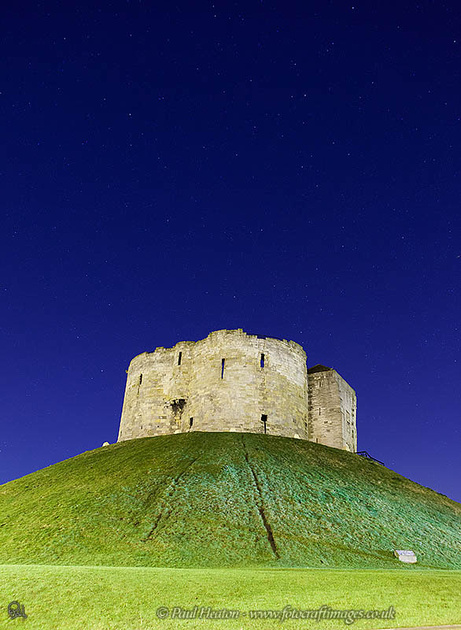 My reference point for the adjustment was the colour of the stonework of the tower. this is a slightly warm grey colour in daylight, and if I could reproduce this in the image, then the rest of the picture should look more natural. This adjustment gave a deep blue colour to the sky in the image. I could have eliminated this in post production, but decided that our eyes would accept that - after all, the sky is blue in the daytime!

I was astonished by the sheer number of stars I could see in the full resolution version of this photograph. Here is a full resolution crop from the area near the top of the tower: 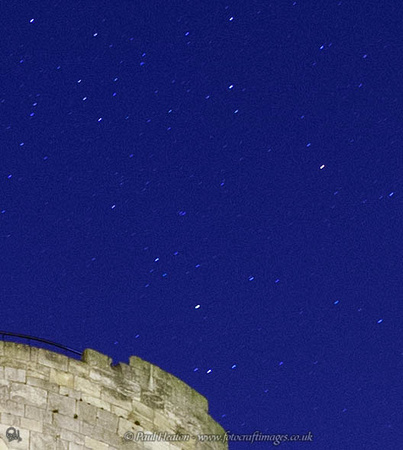 This may not be impressive in comparison to a photograph taken on a dark night in the countryside where there is no light pollution. However, for a city centre photo I was both surprised and pleased with the result.

The photograph was a 30 second exposure. The final interesting fact I learned from that shot is that even over this period the rotation of the earth will turn the light from the stars from a point light source into a curved trail, cented on the pole star.

I hope that I never stop learning as a photographer. I certainly learned a few things from this shot. It also generated some ideas for other photographs I would like to take in the future, when the opportunity arises.