Cyfrwy is a subsidiary peak of Cader Idris. I visited it last week, and was struck by this rock formation seen from the summit cairn: 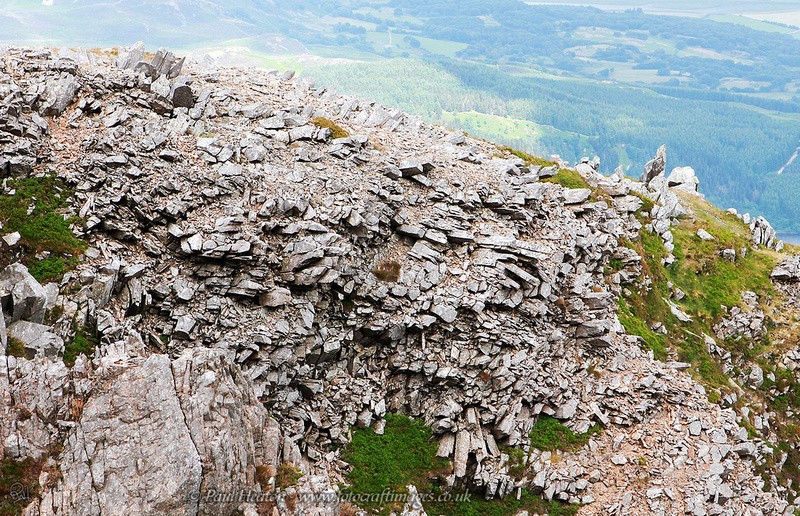 I am always interested in the geology and geomorphology of the landscape, and wondered how the structure was formed.

Starting from what I know, research on the interernet indicates the Cader Idris is formed from rocks of Ordovician age (485-443 million years ago) - An article in Geological Consevation Review -  http://jncc.defra.gov.uk/pdf/gcrdb/GCRsiteaccount2711.pdf gives a geological map and details of the rocks of Cader Idris. Comparing the geological map with the Ordnance survey 1:25,000 map suggests that the rocks at the summit of Cyfrwy are microgranite intrusions. The text of this article on Cader Idris states that

"The Cadair Idris microgranite, previously referred to as ‘granophyre' (Davies, 1959), is for much of its outcrop a sill up to 600 m thick. It forms a prominent escarpment immediately north of Cyfrwy, Penygadair and Mynydd Moel, with columnar jointing evident in the escarpment cliffs."

So far so good. Columnar jointing I can understand. However, well known examples of columnar jointing (such as Fingal's cave and the Giant's Causeway) are vertical, but these rocks seem to explode out of the rock face almost horizontally (the main part of the picture), inclined more steeply down at the bottom of the exposure, and pointing towards the sky on the top of the slope.

If any geologists read this I would be very interested to hear any possible explanation of how this has arisen....