All landscape photographs require a combination of planning and good fortune in different combinations. Sometimes, the light and the location just work together, and a photograph can be made in a single trip. On other occasions either the light or the location isn't right, and multiple visits may be required to capture the shot.

One of my most frustrating challenges in recent years has been to obtain a winter photograph of Ingleborough covered with snow. I found a location with a view I liked in the summer, and kept both a written and mental note to return when there was snow on the ground. The view is from Crina Bottom, with a track and river valley providing a frame for Ingleborough's summit.

On my first three visits to this spot in winter I didn't even take my camera out of its bag! The first time there was much less snow than I was expecting, and the view was disappointing. The second time the summit of Ingleborough was in cloud, and the third time there was a stubborn sheet of stratus cloud flattening the light. This trip was even more frustrating, as the cloud was in the North and West and over Ingleborough itself, but I could see that there would be good light elsewhere in the Dales. I waited for a couple of hours for the cloud to clear, but it was one of those days when it never did.

On my fourth visit there was some better light and I did take some photographs. However, the images were rather flat, and once again the snow cover wasn't perfect. This is one of the images from this fourth visit: 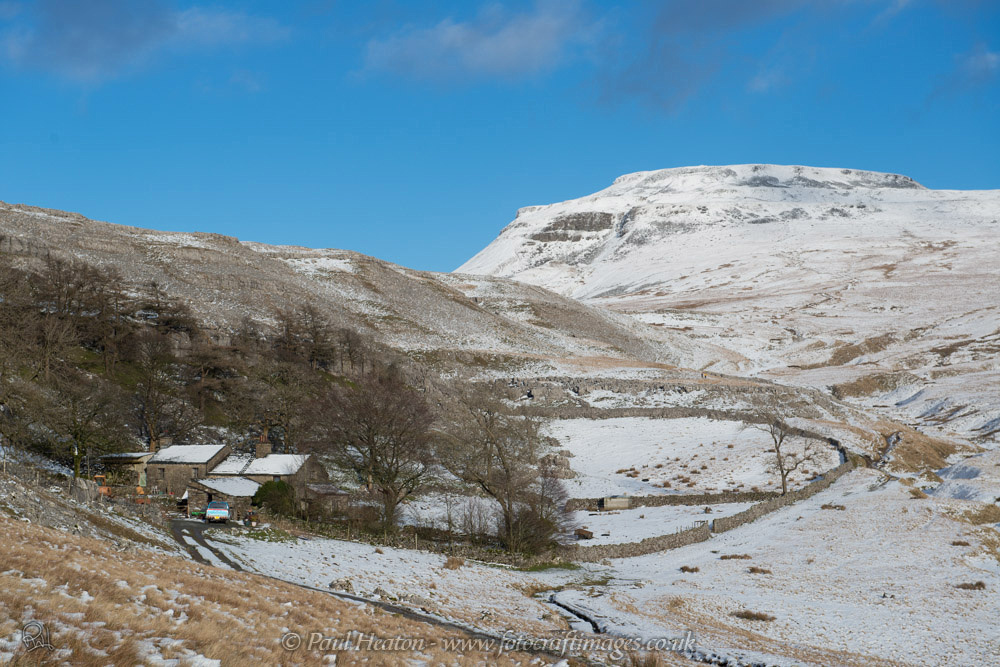 I worked the location for a while, but the angles didn't really work, and the images didn't have the impact I had envisaged.

At this point I could have just given up, with a view to coming at a different time. However, I decided to walk round Ingleborough to try to give myself more of a sidelight to work with. Most of the higher fells in the Dales are access land, so I could wander across the landscape at will. My target was White Scars - the area of limestone pavement behind the farmhouse in the photo above.

I climbed the steep slope onto the flat limestone pavement, and began looking for some feature (maybe a glacial erratic or tree) to anchor the foreground of the photo I was now planning. My search was fruitless, so my next option was to walk over to the far side of the limestone pavement to see if I could find a crag to act as foreground. I spotted a couple of possibilities, but nothing that screamed "that's it" and then, finally, spotted the feature which made the day - a miniature partly frozen tarn.

The tarn itself is an anomaly, as limestone pavements are usually dry. Some glacial till may be acting as a natural pond liner to allow the water to accumulate. As I approached, I realised that this small sheet of water and ice was exactly what I had been looking for - providing colour, shape and texture in the foreground of the final image. One lesson I have learned from experience is to think ahead when taking shots across snow, ice and sand. It is all too easy to walk across a spot which would have made a perfect foreground for an image, so I walked around and carefully approached towards Ingleborough's summit.

After finding the location, and setting up the shot I began the waiting game for the light. There was probably around 40% cloud cover. I wanted the foreground and the summit of Ingleborough to be sunlit, and I also wanted some clouds in the sky, but not too much. After the best part of an hour, I got the shots I was looking for. This was the result: 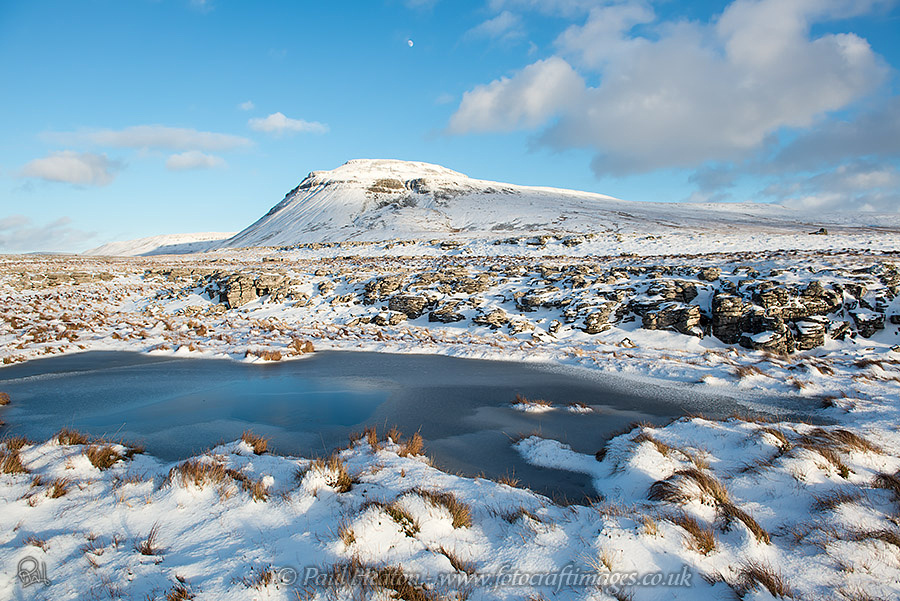 An unexpected bonus was a nearly full moon above the summit of Ingleborough.

I also took a portrait image from nearby: 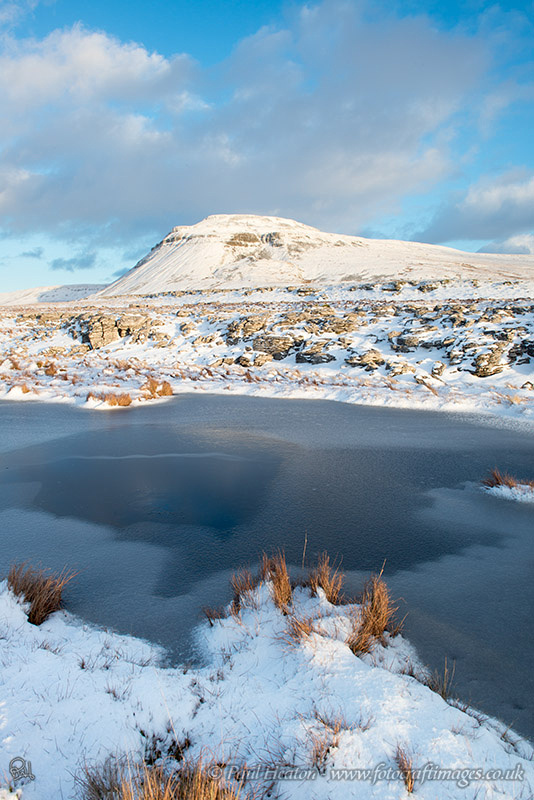 and, finally, looking around, decided to take a telephoto shot of Whernside - highlighting the emptiness of the moorland around the highest point in Yorkshire. 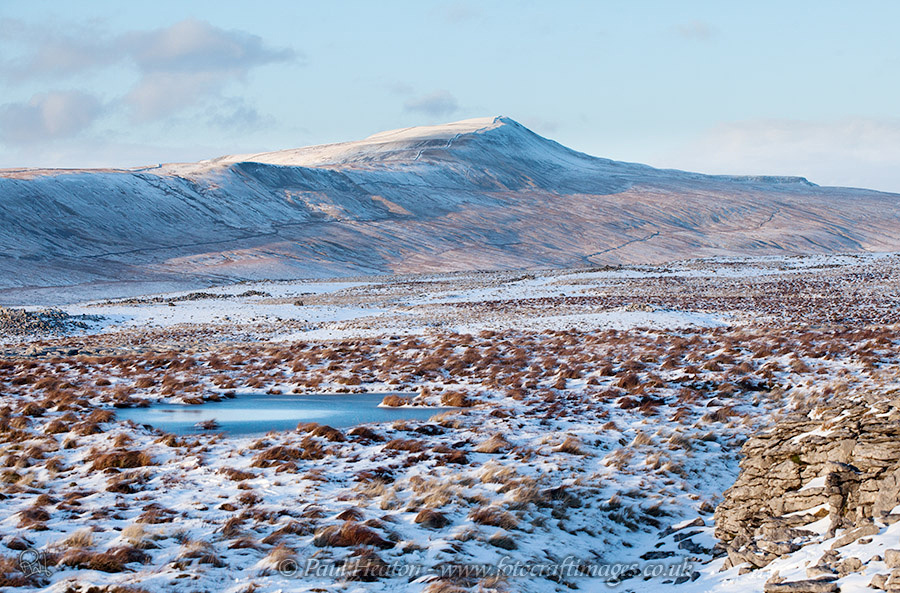 The small pool in this image is the same one which dominates the foreground of the previous two photographs.

These photographs are all now part of my range, and can be ordered in a variety of sizes in the three peaks gallery (http://www.fotocraftimages.co.uk/three-peaks).

The landscape image is also included as the January photograph in the 2016 Fotocraft Images Yorkshire calendar - see http://www.fotocraftimages.co.uk/2016-calendar.