I have been using digital SLR cameras for more than twelve years and, until last weekend, had been lucky enough to never have a problem transferring images from a memory card to my computer. That changed after I returned from a day out with my family and inserted the Compact Flash card from my camera into my computer. Lightroom started up normally, but when I inserted the card into the built in  reader of my PC, it didn't appear on the upload screen.

Computers can be very frustrating when they don't work as expected, so I now needed to work through a series of troubleshooting steps to try to diagnose and solve the problem. My first step was to shut down and restart both the PC and Lightroom. Next, I tried removing and re-inserting the card in the reader.

Satisfied that the card was apparently OK, I took it out of the camera to connect to the computer with another card reader. THIS WAS ANOTHER MISTAKE! I should, at this stage have downloaded the photographs using a direct USB connection from my camera to the PC. When I connected the card to my spare reader it was again not recognised by the PC.

I now began to suspect that there was a problem with the memory card. Examining the contact holes on the card revealed apparent damage on the third pair of holes on the left of the card: After seeing this, I looked at my spare compact flash reader with a bright light, and found the one of the contact pins on the reader was bent out of position. As a useful tip, the head torch I use for night shoots is extremely helpful in providing a bright directional light for any such close up work. I now had a sinking feeling about both the photos and my camera!

My next step was to remove the cover from my spare compact flash card reader. I used a knife and pin to re-straighten the bent pin, although I couldn't see anything in the damaged compact flash card holes, I attempted to dislodge any foreign objects by rapping the card on a table, and then used a fine pin to confirm nothing appeared to be blocking the holes. Carefully inserting the card back into the reader, I tried to download the pictures again. 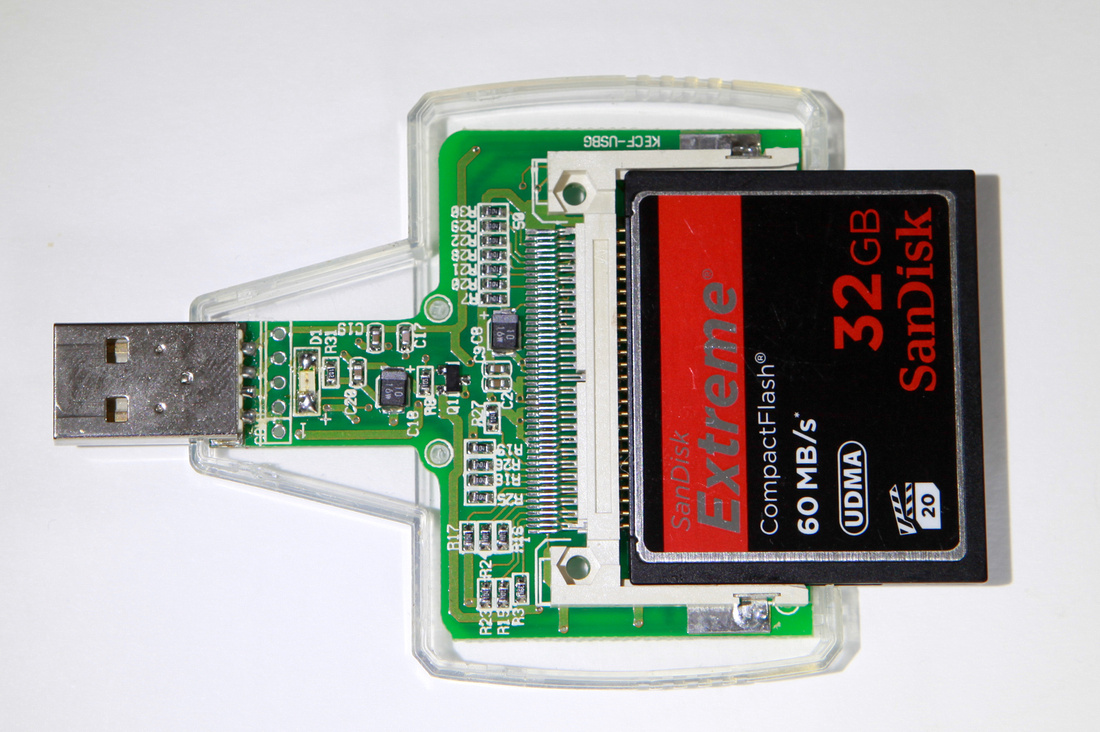 Unfortunately, the card was still not recognised. I found an old, low capacity card in a drawer and tried that card in the reader. It was recognised, confirming that the 32Gb card containing the photos was damaged. If the photographs on the card were irreplacable, I would have pursued other data recovery option. However, my wife was also taking pictures on our day out, so this was not necessary.

My next issue was to check my camera. A careful review (again using my headtorch) showed that there appeared to be no damage to the card pins in the camera. 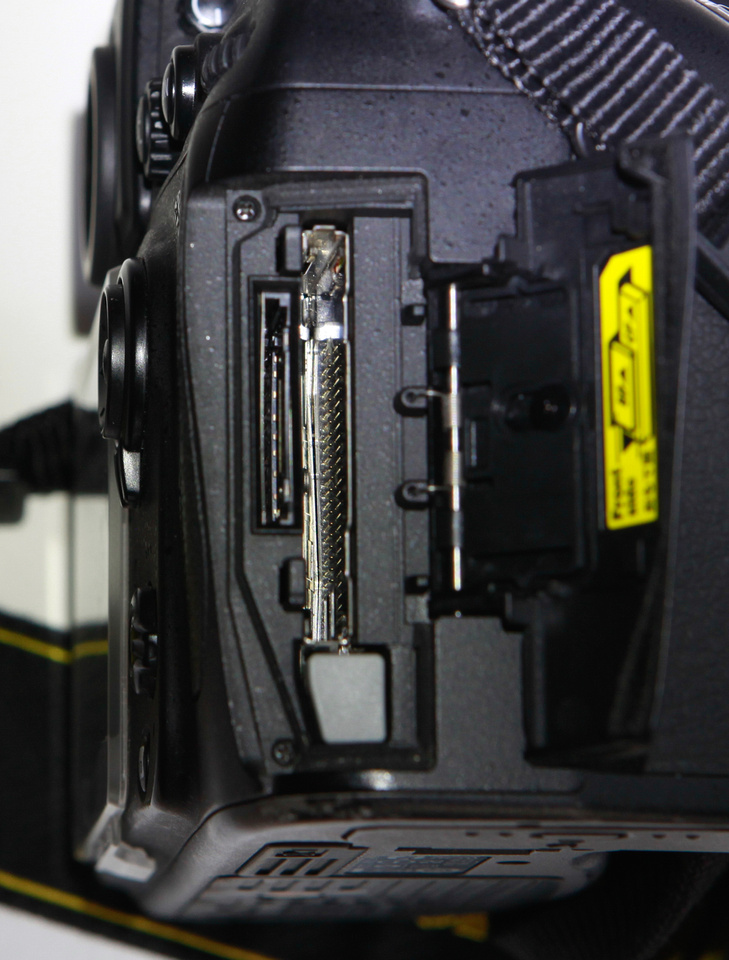 Finally, I needed a replacement card. The Nikon D800 I use as my principal camera has both CF and SD card slots. Although I have used CF cards without problems for over 12 years, I decided to try using an SD card instead.

The SD card terminals are larger and flat, so there is less risk from bent pins causing problems. Compact Flash cards on the other hand can offer higher data transfer speeds. This is where the specific use of the camera by each user will affect the decision making. The Nikon D800 has a buffer of 16 shots in RAW shooting mode. I have never filled the buffer in all the years I have been shooting, and over 90% of my images are shot on single shot mode. I therefore don't need an ultra fast card. I do however prefer to stick with an established brand, to avoid any reliability problems. I therefore chose the Sandisk Extreme 32GB card with a rated read speed of up to 90mb/s (the write speed is less than half this - up to 40mb/s). 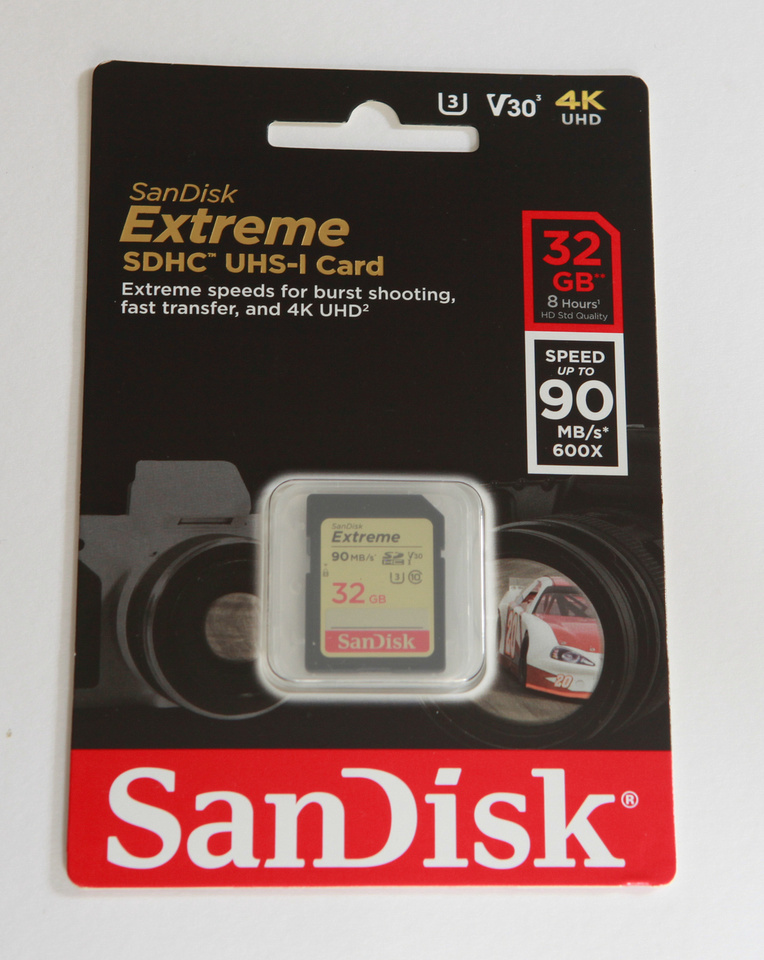 After receiving the card, I decided to test its burst shooting capabilities. When set up for RAW shooting my Nikon D800 has a buffer capacity of 16 shots. I shot a high speed burst to find out how many photographs the camera would take before the buffer filled. I expected to take more than 16 shots, with some images being recorded to the card while I was shooting. This is not what happened. The camera worked through the buffer, then stopped shooting as it began to write to the card. The shots were much slower at this point, with a couple seconds between each shot as the previous images were transferred from the buffer to the memory card.

My conclusions from this experience are:

1. Insert compact flash cards carefully into a card reader, particularly if it has short rails and the card sits partly outside the reader when seated for data transfer

2. Compact flash card readers where the card sits well into the reader (and therefore has longer rails) are to be preferred

3. Choose both the size, speed and capacity of your card based on your individual shooting style. If I run into situations where I think I may need to shoot 16 or more shots as a burst, I will invest in a fast CF card. Based on my current shooting style and subjects however, this seems pretty unlikely to happen.

4. Think carefully about using ultra high capacity cards just in case something goes wrong. On holiday, for example, there is a trade off between the risk of mislaying a card separated from the camera and the risk of card failure.

5. Using a USB cable to transfer between the camera and PC eliminates the risk of bent pins, or foreign objects getting into card holes. However, it may be a slower way of transferring data, and could introduce other risks into the process (such as the camera falling during the data transfer). Based on the specific layout of my workspace, I have decided to continue to use a card reader to get my photos onto my PC.

If you have had any issues with memory cards, or thoughts on the issues raised, I would be interested in seeing them in the comments on this post.