Photographing the milky way over Yorkshire

I spent some time in 2016 photographing star trails over Almscliffe Crag. I was pleased with the resulting picture, which you can see here: Almscliffe Crag Star Trails. I wanted a new challenge, and decided a photograph of the Milky Way over the Yorkshire countryside would be an attractive companion piece, and an interesting addition to my portfolio.

After quite a lot of time and planning, this is the resulting photograph: 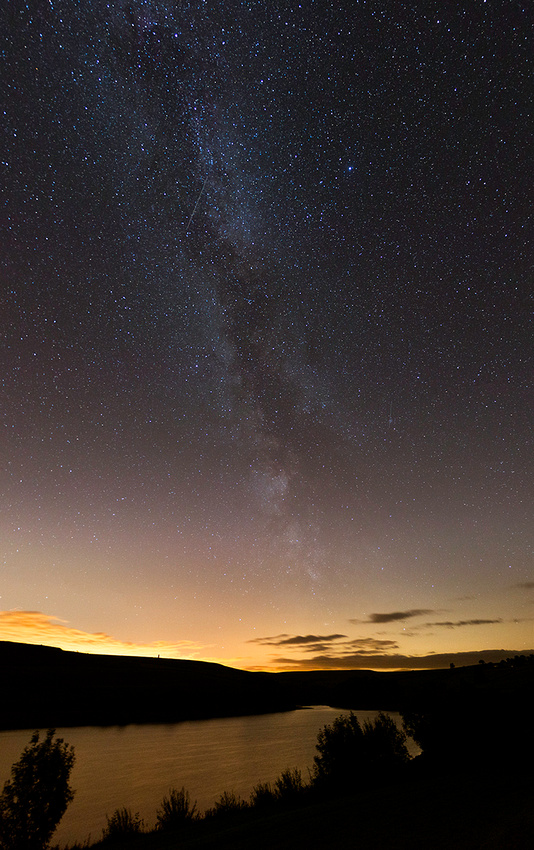 The image can be appreciated on its own, but it is interesting to look at the planning involved in capturing it.

1. The Milky Way being prominent in the sky.

The Milky Way is most visible in the Summer time. However, this is also when the nights are shortest, and in the middle of Summer, it never becomes fully dark - the sun never gets more than 18 degrees below the horizon - the definition of fully dark, or the end of astronomical twilight. I used "The Photographer's Ephemeris" (discussed in this post) to determine that there was a period from 15 August through to 25 August when the moon would have set during the darkest part of the night. It also gave me the times of sunset, and the various different levels of twilight to help my planning.

The next stage of planning was to decide on a location for the photo. I selected two possible spots - The Cow and Calf Rocks near Ilkley, and Swinsty Reservoir in the Washburn Valley between Otley and Pateley Bridge. I knew that the centre of the Milky Way would be approximately SSW at the time when I was taking the pictures. Both of these locations would give an interesting foreground with the camera in this direction.

I followed the weather forecasts, and went out on 15 August to try my luck. This first trip was quite disappointing. The Milky Way is not the brightest feature in the sky and, with an exposure that would show it, I found all the images I shot had a great deal of light pollution - reducing the contrast, and degrading the photo. This image is typical of those I produced: 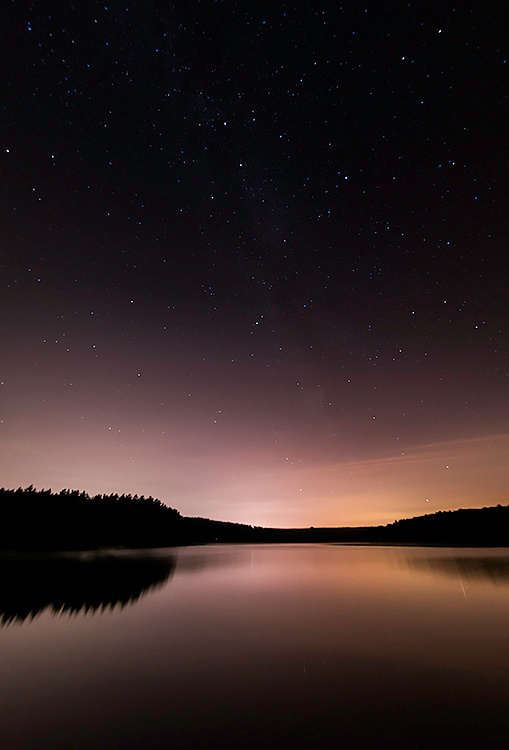 The Milky Way is only faintly visible in this image. Clearly I needed to find somewhere more remote, with a greater distance from the lights of West Yorkshire's major towns and cities. I also still wanted some interest in the foreground of the picture. My objective is to create a photograph of the Milky Way seen over Yorkshire, not a star picture which could be taken anywhere. I scoured my maps, and eventually decided to visit Leighton Reservoir, just next to a minor road running between Masham and Lofthouse in Nidderdale.

The image at the top of this post shows the results from this second trip a few days later. There is some light pollution still visible near the horizon. However, at this reduced level it is not so distracting. The main light pollution glow appears to originate to the South of my location, and probably comes from the town of Pateley Bridge, about 9 miles away. The shape of the Milky Way is clearly visible in this photograph, particularly away from the horizon, and the reservoir provides a pleasing composition leading towards the "base" of the Milky Way in the picture.

Standing beside my camera in this peaceful location, made me realise just how much we lose in our urban environment, when we may only see a few dozen stars on a clear night, and many people will never have seen the Milky Way "in the flesh", or paused to reflect on our place in the universe, when we are looking towards around 100 billion other stars in our galaxy.

The heading photograph from this post has now been included in my portfolio, and is available for purchase HERE. We will also have copies available in various sizes at future fairs and shows. This isn't however the end of the story. Part of my motivation in taking pictures is to continually improve, so I will keep on looking for opportunities to take more attractive images of the night sky.

Tips for photographing the Milky Way

You will need a sturdy tripod, preferably a cable release, and a camera which has manual exposure and focus facilities. A digital SLR will probably give the best results.

Achieving focus on the night sky can be difficult. it is best to set the camera to focus on infinity in advance of the shoot, and tape the focus ring with gaffer tape to prevent to prevent it from moving during the shoot. I did this from the top of a hill near to where I live. 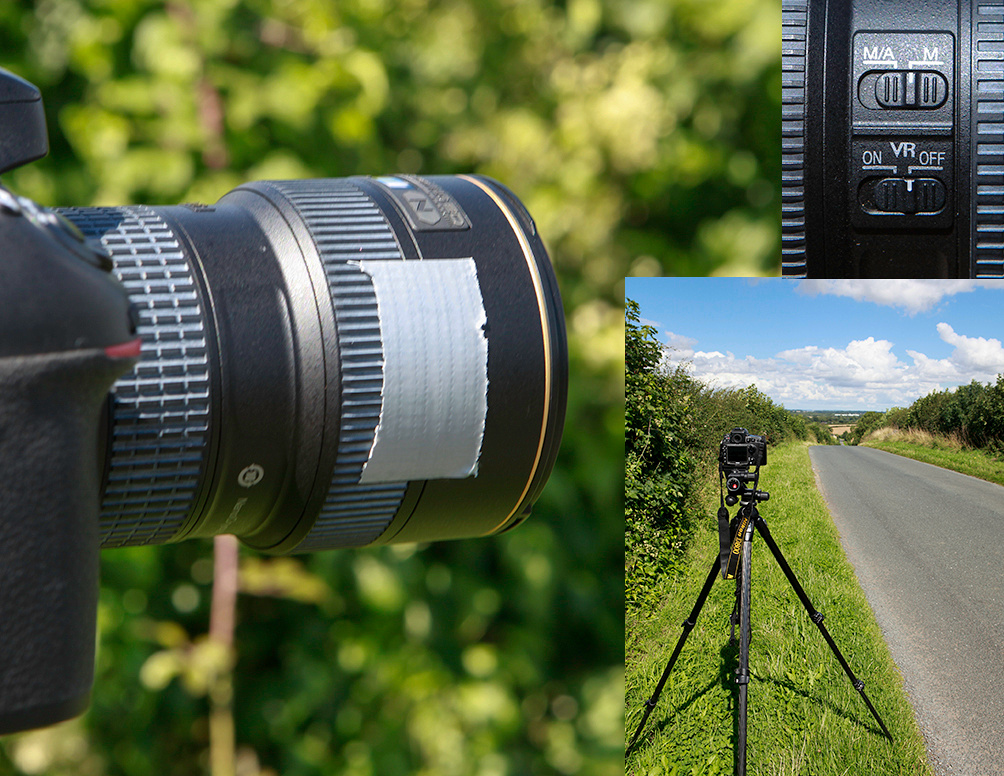 Set your lens to its widest aperture, and set the shutter speed and ISO manually. The settings will depend on the characteristics of your lens and sensor. My starting point with my Nikon D800 was ISO 1600 and a shutter speed of 15 seconds with a 24mm f2.8 lens. The shot at the top of the page was taken at these settings.

Adjust the exposure and ISO during the shoot to generate the greatest level of detail in the image files. You do not want the stars to appear as star trails in these photographs. Use the magnifier in Live View to check this.

Experiment with montage images to capture a wider arc of the milky way than you can in a single image.

The photographs can be improved significantly in post processing to bring out detail which has been captured by the camera, but is is not easily visible in an unprocessed file. Do not however over process colours, as the resulting images can look very false.

Most important, enjoy the experience of seeing and capturing the night sky in all its glory, something which fewer and fewer people have the inclination or opportunity to do!

Since this post was written, I have made time to add some more night sky pictures to my portfolio. The blog post and photographs can be seen here: A Night Out at Ribblehead .